This article will guide you through the process of merging teams within MangoApps. In MangoApps, teams is a term that refers to projects, groups, and departments.

Who has the ability to merge teams?
In order to merge two teams together, you need to be the admin of both teams.

How do I merge teams?
Click the more icon on your team’s page. You’ll see a merge option.

After clicking merge, the following popup will appear. 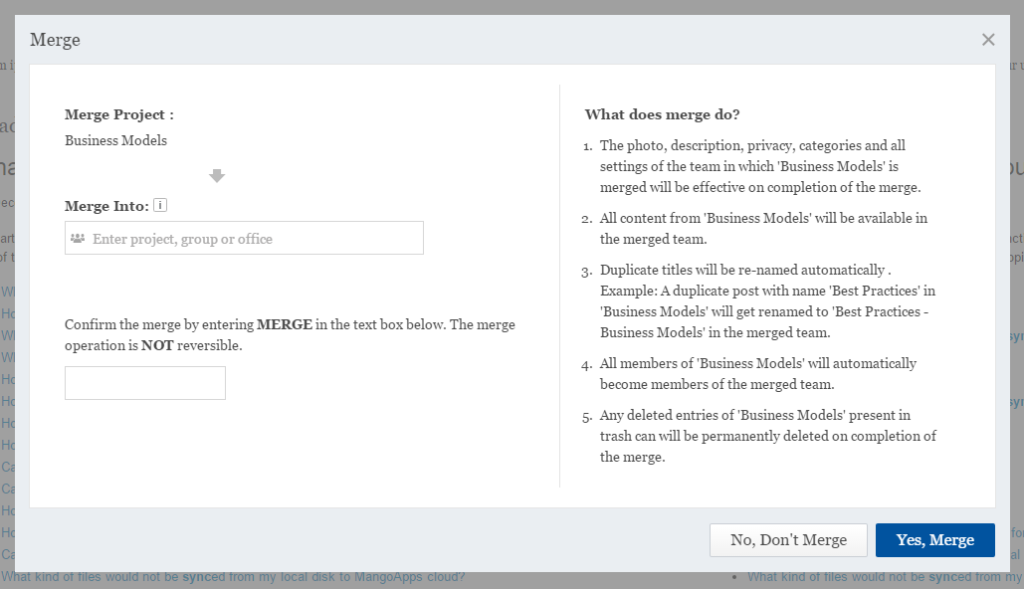 The merge team name is already selected. As you enter text into the Merge Into box, the teams which you are an admin of will appear and you can select the team that you want to merge.

Enter MERGE in the text box to confirm. Read about what merge does and click “Yes, Merge” when you’re ready. A processing message will show and a feed is posted in the destination team.

Which teams can I merge?
You can merge any of the teams listed below:

What will happen to the admin(s) and members of the merged team?
After the two teams are merged, the admins become admins of both teams and member rights remain applicable.

What will happen to the Home Page during conversion?
The homepage of the merged team will appear in the destination team with a time stamp.

What will happen to the title and description of the merged team?
They will be lost. The destination team’s description and title will remain.

What will happen to content that has the same name in both the teams?
We will attach the team name to the content of the merged team while merging it in the destination team.